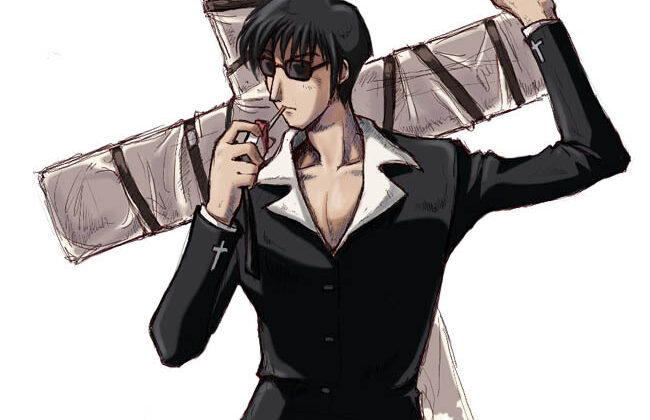 I was writing/voice-directing the Fox TV series “Digimon Adventure 02.” I was also writing and directing “Digimon: The Movie.” That doesn’t seem like such a big deal, one project after another. The problem was, I was making both the movie and TV series SIMULTANEOUSLY!

I was working 20 hours a day, every day. So when Kevin Seymore called to book me for my next Wolfwood session, I just didn’t have the time.

Kevin ran Animaze, which worked out of Les and Mary Claypool’s Magnitude 8 Post, up in Sun Valley. Over the years, he cast me in shows like “Fist of the North Star,” “Outlaw Star” and now “Trigun.” I told Kevin about my busy schedule, and he was very sympathetic.

He said the good news is Wolfwood only had 11 more hours to record. After that, he was out of the series (AKA “dead”).

“Kevin, if you can find 11 hours in my schedule, good luck. But ‘Digimon: The Movie’ won’t be done for six weeks, and I’ll be happy to book that time with you now.” Wolfwood would have to wait.

I had first auditioned for “Trigun” way back in 1997, I think. I waited for a long time in a crowded waiting room at Magnitude 8 Post. But that was okay, because Les and Mary Claypool had the best waiting room in all of production. A pool table, video games, pinball, etc. There was always something to do while you waited around.

When it was my turn, I walked into the booth, and there was Kevin, Les and a Japanese gentleman. The role they had me reading for was Vash the Stampede. And here was the dialogue they wanted the actors to lip-synch to:

Not so easy, even for the best dubbers. I tried my best to get close, and when I was done, they called me into the control room. The Japanese gentleman asked me if I smoked cigarettes. I told him no, but I hear from a lot of people that I sound like I do. He told me in his broken English that they had a character in the show that smoked. He said I would be perfect for it. So they’ll call in a few weeks when they start.

Great. Booked a gig without ever reading for it! They didn’t even tell me his name was Wolfwood! They could have saved me the embarrassment of butchering Valentinez Alkalinella Xifax Sicidabohertz Gombigobilla etc…

Kevin wasn’t too thrilled he had to wait for six weeks, and neither were the people who owned “Trigun.” They kind of harassed me to finish before I told them I could. Finally, I just decided to do one straight 11-hour session at night to be done with it!

So, one Friday night, after voice-directing “Digimon,” the “Trigun” voice-director Joe Romersa and I pulled an all-nighter. We finally finished around 6 a.m. When I played Wolfwood’s death scene, I felt like death myself.

I actually stopped focusing on acting after that, because I just didn’t have the time to act anymore, let alone audition! And “Trigun,” “Outlaw Star” and all the other titles that weren’t “Digimon” disappeared from my life for a long while. I would still cast myself in small roles in new projects I voice-directed as the years went by – shows like “Zatch Bell” and “Naruto.” But my acting career was pretty much on hold.

Seven years after the last time “Trigun” crossed my mind, I was the show-runner for “Digimon: Data Squad.” One of my favorite voice-actors, Steve Blum, worked on that show with me. During one of his sessions, he told me about an anime convention, Anime Central in Chicago (ACEN for short). They invited Steve and asked him to recommend a voice-director he worked well with to do a panel together! I was free on that weekend, and was excited to do my very first con!

Steve Blum had to bail on the convention at the last minute, and now ACEN asked me to recommend an actor I worked well with for the same panel. Quinton Flynn was the lead in “Digimon Data Squad” and was an old friend. We went all the way back to our early Los Angeles Improv Comedy days. And I knew Quinton had never been to a convention either, so it would be really fun to go together.

ACEN was electric that first year! I met so many other voice actors, writers and voice directors from other cities like Dallas, Houston and Toronto. And, of course, the fans were a spectacle! A decade earlier, a small gathering in San Diego called Comic-Con invited me, and I thought, “Hard pass!” But now I was sorry I had been missing out for so long.

They introduced us to an enormous Opening Ceremony crowd. Now here’s the truth…Most “stars” of anime had no idea they were famous until their first convention. And I was no different. I took the mic and addressed the crowd. “Hi, you guys probably remember me from ‘Digimon,’” and then I droned on about “Digimon Data Squad.”

But while trying to promote my new show, I started to hear people shouting something from the crowd. I couldn’t quite make it out, it sounded like they were just yelling, “Woo woo!” Maybe it was a con term I wasn’t familiar with like Glomp and Squee.

Finally, I just flat out asked the audience, “What are you yelling at me?” And then I heard clearly, hundreds of people yelling, “Wolfwood!”

“Oh, yeah,” I said into the microphone. But I was really lost in the synapses of my memory trying to recall that name. “I think I played a character a long time ago on a show called…‘Trigun?’”

Cue standing ovation. Wow! I had no idea anyone had ever seen “Trigun” before. When I recorded it, the show went straight to DVD. Adult Swim and Cartoon Network weren’t a thing yet. That so many people knew about the show blew my mind. And they thought my character was cool!!!

My main character from “Digimon,” Tentomon, was a lot of things, but no one ever called him cool. I felt like the Fonz of anime!

All weekend long, I bonded with the fans. They taught me more about “Trigun” than when I recorded the voice for Wolfwood! After all, the only scenes I saw were the ones I was in! All the actors worked alone. We only saw each other passing in the waiting room.

A funny side story – years later, I was voice-directing “Bleach.” “Bleach” and “Trigun” both starred Johnny Yong Bosch, and we had never met. When Johnny showed up for our first session, I shook his hand and said, “Vash the Stampede, meet Nicholas D. Wolfwood.” We’ve been good buds ever since.

The Impact of Wolfwood

Now that a dozen years have passed since my first convention, Wolfwood is a huge part of me. And not because it was so memorable a role (considering I couldn’t even remember I played it). It’s because of the fans.

They have shown me so much love for “Trigun” over the years that it’s humbled me to my core. That they love my voice for that character and travel for miles to meet me is an honor. And some people had a rough time in life and told me “Trigun” was an amazing and much-needed distraction.

If I see a giant homemade cross poking up through the ocean of fans at a con, I smile. I try to find them and offer to sign their cross. If they took the effort to cosplay as Wolfwood, I try to reward them for their fierce fandom. I always try to give back to the fans. Sometimes I think they’ve given me more than I have given them over the years.

One fan gave me an amazing gift at a con in…Orlando, I believe it was.  It was a photo of his mother. She was sick, and the two passed the time watching “Trigun” together. I’m gonna leave the end of that story right there, because it’s featured in my film “Fame-ish.” Check it out if you want to see how I used it in the film. But I did use the actual photo the fan gave me in the scene. It made it all that much more powerful for me.

“Trigun” returned, and so did Wolfwood, for a prequel some years ago, and I did not participate.

But that’s another story.

For more content from yours truly, check out the official trailer of my feature film, Fame-ish! (And, I dunno, watch it maybe.)