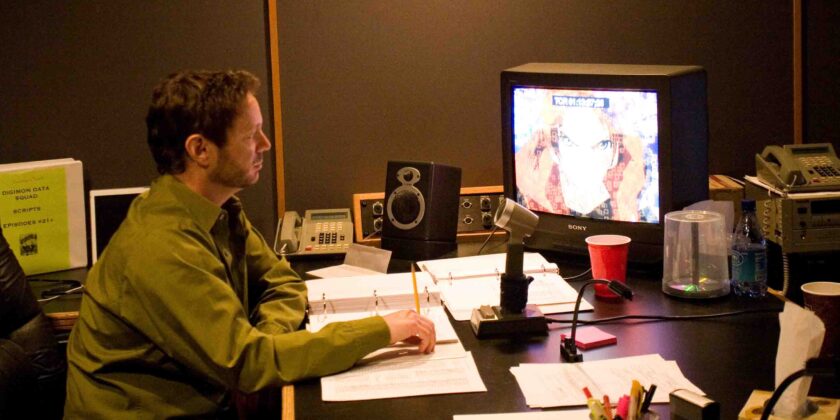 The one thing fans ask most is who are my favorite voice actors? As a voice director, many factors go into why an actor becomes a favorite. Sometimes it’s just because I love their voice and talents. Sometimes it’s because of their professionalism. Other times it’s due to their sense of humor. Or maybe they are a genuine friend of mine.

And many times, it’s a combination of those factors and others. But I can tell you that I personally like to hire voice actors I have a good rapport with. In fact, I try to hire them over and over again. I think a lot of voice directors feel this way. Film directors, too.

You start to develop a short-hand with some actors after working together for so long – almost like you can read each other’s thoughts. You barely have to give them any direction at all. They make voice directing easy for me. The famous film director Robert Altman once said “90% of directing is good casting.” I couldn’t agree more. And at the same time, bad casting can be a bummer.

The first thing I look for in a good voice actor is the ability to show up on time. One of the biggest jobs for a voice director is the management of time and money. If the schedule goes long, it gum ups the works and could cost the production money. The more money you cost the production, the less likely you’ll be voice directing for them any time soon – and the less likely I’ll be asking for that actor again. Showing up on time makes my job a lot easier than most voice actors understand.

Of course, there are many other factors than simple punctuality – like if you’re an asshole. No one wants to work with assholes, even talented assholes. And there’s no shortage of that in Los Angeles. So these favorites of mine are usually on-time, are super talented and aren’t assholes.

We don’t have time to list all my favorites from all the shows I voice directed, so let’s consider this blog Vol. One.

There are quite a few voice actors I’ve befriended through the years who became more than friends. They’re more like family to me.

Tom Fahn. The man is like a brother to me. We speak the same language of New York. He brought me into his family, and now they are all my family. Speaking of which…

Dorothy Fahn. The woman is like a brother to me. No, seriously, even if she wasn’t a Fahn, we love working together. We have our little inside jokes, and we are both Beatles fanatics. We love everything except the work, which keeps interrupting the laughs.

Jonathan Fahn. As close to me as anyone, and he was my right-hand man on “Fame-ish.” I had him do a James Mason impersonation for a character in “Zatch Bell!” Hilarious!

Brian Donovan. I don’t think of voice actors when I think of Brian. He’s the kindest, most grateful, most empathetic person I ever met. So I cast him against type as Rock Lee in “Naruto” and also made him the bad guy in “Fame-ish.” He’s a skilled actor, so he can pull off any character (even a fictional version of himself in “Fame-ish”). Loved working with him in both animation and film, but love being his friend most.

Voice Actors Who I’ve Worked With A LOT

These are the voice actors I never get tired of working with because I LOVE how talented they are!

Colleen O’Shaughnessy. Of all the voice actors, I’ve probably worked with Colleen the most. That voice. It just captures me! I also usually develop a crush on almost every character she plays. We met when she was Sora, and I cast her without an audition for “Digimon Data Squad.” But my favorite character of hers is Suzie in “Zatch Bell!” So funny!!!

Christina Vee. She’s one of the best voice actors I’ve ever worked with. She is so versatile and super talented. And she sings, too!!

Quinton Flynn. Q and I did improv comedy years ago and continued working together when we both went into voice over. We did a world tour of anime conventions some years back, and when we see each other now, it’s like no time has passed.

Melissa Fahn. You didn’t think I’d mention all the Fahns without talking about Melissa, did you?! In fact, she was the first Fahn I met! She was one of the first voice actors in my NFL Films comedy pieces back in ‘96. Melissa and I used to work together all the time when I was a full-time voice director – but she got upset when I told her I work with Colleen more. Oops.

Wally Wingert. Wally was my go-to guy on “Zatch Bell!” When I had no clue what to do with a character, I’d call Wally in. We’d figure out what celebrity he could impersonate to make it funny, and he had a TON to choose from! I love working with him, and he lives across the street from me!

Voice Actors I Used to Hang With

In my younger days, I enjoyed going out on the town. These are some of the voice actors who joined me!

Laura Summer. Sweet Laura. Also, bonded with her right away, and we ran together in the same crew as…

Anna Garduno. My Anna Banana. I love both these ladies so much. We used to go out to movies together, old-school bars, cool restaurants, hip clubs. Anna was the ringleader for sure. We were young (-ish), employed and in Hollywood. Great memories.

Doug Erholtz. We’ve always been close buddies, especially during the “Digimon 02” years. We hung out all the time back in the late ’90s! Doug’s a charming, handsome dude who attracted lots of single young ladies in bars to come over and ignore me. But Dougie’s one of the most talented and funny voice actors around.

Lori Alan. Lori and I went to NYU’s Tisch School of the Arts, and we’ve known each other since we were 18! We don’t hang out nearly enough anymore here in Los Angeles. But we used to all the time! Miss you, Lori!!

Brad MacDonald. I met Brad through some Minnesota improv comedy friends. Coincidentally, I met Maile Flanagan through the same friends years before I voice directed the first season of “Naruto!” Brad now has a great commercial career, but at the time, I gave him his first VO gig. Anyway, Brad and I sang more karaoke together than I care to remember.

Tom Gibbis. Tom was also part of the Minnesota Mafia of improv folks who I used to hang with. I gave Tom his first VO gig on “Naruto,” but I wanted him to play Willis in “Digimon: The Movie.” I fought long and hard, but in the end, we cast someone else. You win some, you lose some. That’s life for voice actors.

Voice Actors Who Crack Me Up

The following voice actors reduce me to tears from laughing.

Richard Epcar. Richard almost killed me one day from laughter during a session for “Digimon Data Squad.” There’s no one better at playing funny villains. Richard’s Etemon from “Digimon” is classic!

Michael Sorich. The Great Greek. Squatt’s Voice from “Power Rangers” makes me pound the floor with laughter when he gets going. One of the great guys in voiceover.

Liam O’Brien. Don’t let his D&D exterior fool you. His snarky comments in between takes are like a comedy special. He had me laughing so hard on “Ultraman” that I needed to take multiple breaks.

Steve Blum. One of the funniest and filthiest senses of humor ever. His outtakes could never be broadcast. We always have a ton of laughs in the booth together, and he’s someone I always look forward to seeing. One of the best voice actors and one of the best guys!

Crispin Freeman. Crispin is one of the few who could challenge Blum’s X-rated outtakes championship. I reminded him of one recently, and he had no idea what I was talking about. Luckily, I’m here to remind him.

Stephanie Sheh. One of the best voice actors to work with. Off-mic, she makes me laugh so hard! Just a great, talented performer with a wicked sense of humor.

Erin Fitzgerald. It took me forever to work with her, and now I never want to work without her again. She cracks me up!!!

Fred Tatasciore. It’s always a comedy show when Fred and I work together. We slip in and out of celebrity imitations with ease while we talk, and we both talk a lot. Great times recording together.

Some voice-actors are supernatural dubbers, which makes voice directing a lot easier.

Yuri Lowenthal. An ultra-fast dubber. So good that when we worked together on the insane “Blue Dragon,” there were days I let him direct himself. Not a fan of the show, despite voice directing much of it. Yuri was the one bright spot. Hard-working guy and a real pro and a real buddy.

Mona Marshall. Mona is a Prodigious dubber. From Izzy to Chavo, Mona has consistently been one of the better voice actors in the biz!

Johnny Yong Bosch. The Vash to my Wolfwood. Funny, we never met while recording “Trigun” as voice actors. We each recorded one at a time. So when I started voice-directing “Bleach,” I told him, “Vash the Stampede, meet Nicholas D. Wolfwood.” You’d be hard-pressed to find a better series lead than my man JYB! You just tell him, “Go,” and it seems like he can dub for minutes without me saying, “Cut.”

Wendee Lee. You would expect nothing less from the Queen. We worked together so often when I first started dubbing, and she’s still the gold standard.

Voice Actors I Play Sports With

Lots of voice actors are weekend warriors here in LA. Here are some I play ball with.

Kirk Thronton. Solid softball outfielder with an above-average arm and a great line-drive hitter. Oh, yeah, and a good voice actor, if you like that sort of thing. I’ve written a lot of parts for Kirk over the years, and luckily, he’s one of the few Yankees fans who can read.

Chris Edgerly. The Edge! We played softball on the same field together for years until he moved cross-town. We had a great reunion on “Ultraman,” though. He was great on the show, and it was great seeing him again!

Phil Lamarr. Phil is one of the best softball players I’ve ever played with. A phenomenal athlete. He played in the Fahn brothers softball game until he got too busy. We actually knew each other through The Groundlings before that, but to this day, we’ve never worked together.

Neil Kaplan. Technically, Neil doesn’t play softball with me, but there are very few voice actors I’ve talked baseball with more than Neil. We’re both baseball fanatics and never tire of talking about it, whether we’re in the recording booth or not.

Brian Palermo. Also not a softball buddy, but we’ve played weekend beach volleyball together for years! Brian’s my closest friend, and even though he doesn’t do a lot of VO, he was great for me in the shows I cast him in: The evil Kurata in “Digimon Data Squad” and Ide in “Ultraman.”

Many more favorite voice-actors to follow in Vol. 2! Stay tuned to my blog page for more.

For more content from yours truly, check out the official trailer of my film, Fame-ish!