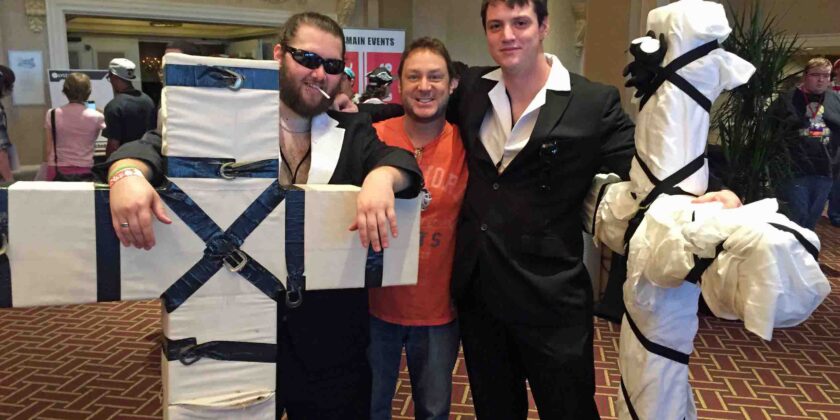 Anime Cons and the Holidays

The holiday season is upon us and for many voice actors, that means a lot of travel. Not just traveling home to their families, but to Anime Cons. These conventions don’t just take place in America because it’s not Thanksgiving everywhere else in the world. In most places, Thanksgiving is just another Thursday. In fact, there’s actually an anime convention somewhere in the world every single weekend of the year. Except for this year, obviously. Sigh.

The respite from traveling actually got me thinking about all the fans I’ve met at cons over the years. It’s been an interesting journey for me, but I won’t lie, having fans still feels a bit weird. Seeing people lined up… excited for your autograph is like entering the Twilight Zone. It goes against what your brain knows to be true and it’s all so surreal and it takes some getting used to. After many years of attending anime cons, I’ve met some great fans that have stuck with me many years later.

Among other ways, I think that attending autograph signings at cons is the best way for fans to meet their favorite voice actors. Fans have the actor’s undivided attention for a small amount of time- during which they can have a conversation with them about virtually anything. In the old days, few actors charged for their signatures and a small handful of fans took advantage of that. A young woman in Sydney, Australia literally brought a suitcase filled with action figures for me to sign and it took 30 minutes! After that, I started charging for extra autographs. So blame her! She was the exception to the rule, though. 99.9% of fans are great.

Anime cons are fun fests! Dancing and cosplaying takes place everywhere you turn. It’s like Mardi Gras! Some fans are super excited to meet you. They make great fan art for you, which I usually keep!

One fan was so excited, she wanted me to sign her newborn baby’s forehead. I was really hesitant. I told her that Sharpie signatures don’t come off easily, but she insisted. So somewhere, there’s a teenager with a fading Jeff Nimoy autograph on their forehead.

I’ve also met some great handlers over the years. Handlers at anime cons are usually fans who volunteer to help out. They get us to our panels on time, run our signing sessions, and do anything else that needs doing. Sometimes, I take them out for a meal to thank them for their hard work. There are others that I keep in touch with on a regular basis to this day.

I’m even proud to call a few of them my friends!

Around 2006, I attended my first con, ACEN in Chicago, as a guest. A teenage fan asked me a simple question; “How do you break into the voice over industry?” I told her that she needed to move to where the work is, like LA, or Dallas. Well, flash forward to 2015, at MTAC in Nashville, where another guest was voice actor Erica Mendez. Erica told me that she was the 18-year-old who asked me that question at ACEN in 2006. She had taken my advice, and moved to LA. She went from someone in the audience of anime cons, to someone invited as a VIP guest! I was so inspired by her story that I used it as the base for one of my characters in “Fame-ish.” If you ever want to see a fictional behind-the-scenes story about voice actors at an anime con, check it out!

Speaking of “Fame-ish,” it changed a couple of other fans’ lives too. At AniMinneapolis in 2016, I started to seriously think about filming “Fame-ish.” It was there I met the “Did You Know Anime” dudes, Michael Perge, and Jonny Lobo. A year earlier, I narrated their Trigun episode of “Did You Know Anime”, and now we finally had the chance to meet in person. I discovered that they had a similar passion for creating content that I did. I mentioned that I was scouting anime cons and putting together a film crew, and that I’d be in touch.

Two years later, when I decided Fame-ish would be shot at Geek Kon in Madison, Wisconsin, I did just that. Michael and Jonny drove overnight from their homes in Ohio- all the way to Madison to join our movie crew! Jonny wrote about his experience on the crew in his incredible article, “Fame-ish: A Feature for Fans.” Please check it out.

Anime Cons Have Changed My Life, Too

Of all the great fans I’ve met at anime cons, three stand out. One was a mentally challenged boy at Anime North in 2007. He was a tall teen, with big blonde fluffy hair, and covered head to toe in Viewtiful Joe paraphernalia. He was so excited that he shouted Viewtiful Joe questions from his seat while I was doing a panel. His mother tried her best to reign in his enthusiasm until it was his turn.

After the panel, he made a beeline for me and asked me all about Viewtiful Joe. There’s only one problem. I didn’t play Viewtiful Joe- he’d gotten me confused with a talented voice actor named Jason Palmer. To be fair, he does sound a lot like me, so IMDB mistakenly credited me as the title role. Sadly, anime cons sometimes put me in their programs as Viewtiful Joe, too. I tried to explain as gently as I could that I wasn’t Viewtiful Joe, but he looked at me blankly. It was clear he had no idea what I was talking about.

His beaming smile quickly returned and he asked me another Viewtiful Joe question. I looked at his mom, who was beaming while she watched her son experience pure joy. It was then that I realized: this was so much bigger than me. I smiled back at the kid, and said, “Yes, I am Viewtiful Joe!” After the kid almost talked himself out, I told his mom the truth. She was thankful because it meant so much to her son.

The second memorable fan I met was also at ACEN in 2006. A Chicago friend wanted to see the con madness on a Saturday night. Like I said, anime cons are huge parties! However, amongst the party atmosphere outside the entrance, two teenage boys sat on the curb with dejected faces. My friend asked them what was up. They told us they had taken a long train ride to get there, but didn’t have enough money to get in. My friend felt bad, so he coyly asked them, “hey, ever hear of Digimon?”

The taller teenager suddenly stiffened. He said, “Digimon: The Movie had come out on my eighth birthday. My party was gonna be my dad taking me and my friends to see it. That morning, I looked out my bedroom window, and in the driveway below, an ambulance was taking my dad away. He died of a heart attack during the night. To this day, I haven’t seen Digimon: The Movie.”

We both felt terrible. I said, “Well kid, maybe you finally caught a break because in the history of anime cons, no one is gonna have a better time than you.” He asked, “Why, who are you?” I answered, “The writer/director of Digimon: The Movie. Come with me.” I flashed my VIP badge and set them both up with passes for the rest of the weekend. I also gave them more swag than they could carry, along with a ton of autographs. What are the chances he’d run into me of all people on that given night? I hope it’s a night he’ll never forget.

The final fan I will never forget was a man at Anime Festival Orlando. Actually, I’ll never forget the fan. It’s Orlando my memory is sketchy about. Forgive me, I’ve been to a lot of anime cons. Anyway, he brought me a photo of his mom as a gift. Sadly, she had cancer. To pass the time during her chemo treatments, they would watch Trigun together. It became their thing. And when he heard the voice of Wolfwood was coming to town, he told his mom. She said she was determined to get better so they could meet me together. But she… didn’t get better and so, by bringing the photo, it was sort of like they were meeting me together.

I have that photo to this day, framed, sitting on a bedroom desk. It reminds me of the impact I have on other people’s lives, whether I know it or not. At anime cons, on tv and film screens, you never know how your work will impact someone else. Everyone has a purpose in life, and if mine is to make people happy with my VA work in anime, what a wonderful purpose that is!

I used that actual photo in a scene for “Fame-ish” as inspiration. Even though I’ve seen that scene a trillion times, it still makes me tear up. I dare you not to, either!

For more content from yours truly, don’t forget to check out the official trailer for my film, Fame-ish!