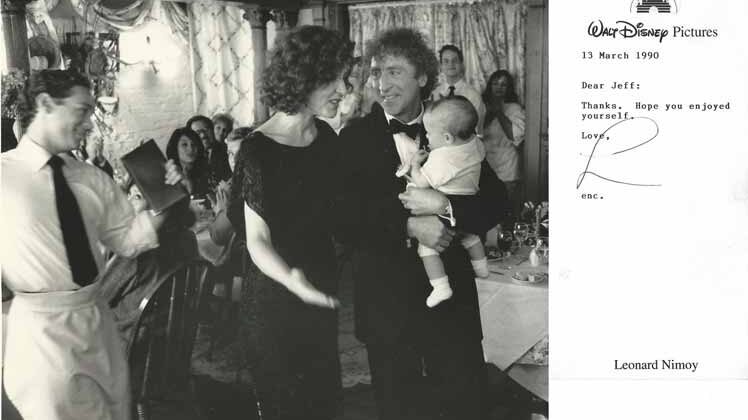 Jeff Nimoy on Being Directed by Leonard Nimoy (Part II)

You better catch up with Part I before reading Part II. Here, just click this link. I’ll wait.

Okay, when we last left this story, I was just cast in Funny About Love as THE WAITER. I was about to be directed by Leonard Nimoy. And I had 6 pages and two scenes with one of my heroes, Gene Wilder. I was so excited I told every single person on the planet.

When I got to the set, I assured Leonard I memorized all my dialogue. He laughed like I just said the funniest thing ever. Only, I wasn’t in on the joke. I was confused about why he’d laughed, but I was too busy enjoying the star treatment to worry. I had my own trailer with my name on the door! Every actor’s dream. I didn’t know then that every SAG actor gets one. It’s in the union contract. But at the time, I thought I had arrived!

I walked to the set and there was Gene Wilder, sitting alone, on a set of stairs. I walked over and introduced myself. “Hi Mr. Wilder, my name is Jeff Nimoy, my cousin is Leonard Nimoy, and I’m playing THE WAITER. It’s an honor to meet you.”

He just sort of half-smiled, and muttered, “Oh, you and Leonard are cousins. That’s nice. It’s nice to meet you.”

We awkwardly choked out a short conversation and I could see that I was disturbing him. He might have had a process before doing a take, and perhaps I was interrupting, I don’t know. Anyway, he was quite pleasant but wasn’t easy to engage. So, I gave him his space and told him I’d see him when we filmed our scene.

Leonard called rehearsal. Suddenly, two other actors dressed exactly like me introduced themselves as the other two waiters. Cool, the restaurant has three waiters. Makes sense.

Leonard quickly gave the blocking. “Gene and Christina (Lahti) argue here in the kitchen doorway. Then, the three waiters say their lines and we’re out. Everybody got it?” Everyone answered yes but me. I had no idea what he was talking about. I wasn’t even sure why Christina Lahti was there. She wasn’t even in the movie until way after THE WAITER scene. Doesn’t Leonard Nimoy know that?! I mean, it was my first movie, I didn’t know anything. Now, I seemed to know even less.

I bolted to my trailer and rifled through the script, trying to find the scene we just rehearsed! Finally, on the next to the last page, I found it. The characters are in the kitchen doorway. Gene says to Christine, “If you don’t love me, tell me, and I’ll get out of the way.” Then, a brief description. “Three waiters tell him to get out of the way.”

My line wasn’t even in the dialogue section. Just a blurb describing my part. I was devastated and I thought about all of those people I had told about my scene with Gene Wilder. But in my defense, why did the casting director tell me I was playing THE WAITER? Why didn’t she say I was playing a waiter (all lower case)? One of three, in fact. That would have made a lot more sense. I mean, why did she send me a whole script for a line they didn’t even bother writing out?!

Leonard Nimoy Gets The Bigger Trailer

So, I asked an assistant director where Leonard Nimoy was. He was in his trailer. I walked over, knocked, and asked if we could talk. He was alone and welcoming. His trailer was considerably bigger than mine. In fact, it had three rooms! A living room, where we sat, a full kitchen, and a master bedroom with a full bath and shower.

I told Leonard the full story and how embarrassed I was after telling all those people about my scene. Leonard agreed that the casting director shouldn’t have sent me a whole script. He guessed maybe she gave me the VIP treatment because we were related. He could totally understand how I would think I was playing THE WAITER.

I asked, “Well, we haven’t filmed this scene yet, can I play THE WAITER, instead of THIS waiter? I mean, you’re Leonard Nimoy, you can make that happen, I’m guessing.”

He told me flat out, no. “That scene is being filmed in NY, and another actor has already been hired. I’m sorry, I can’t fire him just because a casting director sent you a script by mistake.” I was bummed, but I understood. It was brazen of me to ask, but I was so disappointed.

Leonard Cheers Me Up

He told me not to get too down about it and said this will just be a funny story I tell on The Tonight Show one day. Then, he told me a story of how he used to drive a cab to make ends meet when he was a struggling actor. One day, he picked up a fare, who happened to be then Senator and future President, John F. Kennedy. Leonard admired him greatly and recognized him immediately.

He gushed, “Senator, I’m Leonard Nimoy from Boston, Massachusetts, and I’m trying to make it in show business as an actor.” They talked a great deal during the ride. JFK said they both had lots of competition in their chosen professions, but he encouraged Leonard not to give up. JFK said to him, “Just remember, there’s always room for one more good one.”

Leonard told me JFK’s words kept him going through all the struggles of his early career. It inspired him that one of his heroes would urge him to keep going. The fact that Leonard would share this with me, inspired me.

Many years later, when I was going through a particularly down time in my career, Leonard and I were talking. I told him that the day in his trailer was my JFK moment. The example Leonard set for me has been the main inspiration in my career. I was a dumb kid from Brooklyn until he took an interest in my potential. He taught me how to be a pro.

So, what’s the main takeaway? It’s like I said in my previous article; Leonard Nimoy is the most generous man I’ve ever met. Look at all the things he did for me. I never asked him for a thing and yet, he got me into the union and gave me another part in a big movie, anyway!

That’s just the start of his generosity towards me over the years. He gave me so much of his precious time. We spent two hours in his trailer that day, just talking about his career when he was my age. Now that I’m a director myself, I can’t imagine taking time away from a shoot to just sit and chill. Especially with the film shoot on Fame-ish! But that’s Leonard Nimoy. He kept his s#!t together! Kept it Vulcan tight! Lol.

A couple of months after our day of shooting together, Leonard sent me a gift. It was a framed production still of me crossing behind Gene Wilder and Christine Lahti. His generosity knew no bounds. Had no limits.

I loved him so much and miss him all the time. My film Fame-ish! is dedicated to his memory, and I always find myself wondering if he would have liked it. I bet he would have. He loved to laugh. And he had a big, wonderful boom of a laugh.