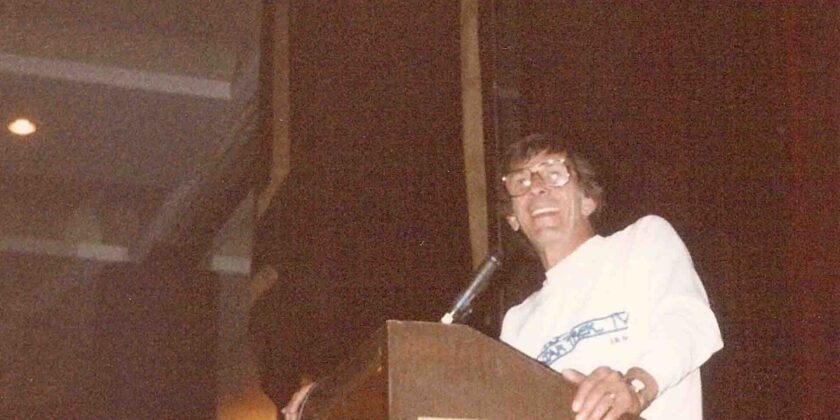 Jeff Nimoy’s Visit to a Star Trek Convention in 1985

I was reading the newspaper in my Brooklyn home, just a few days shy of my nineteenth birthday in 1985. I saw that New York’s Penta Hotel was holding a Star Trek Convention!  I wasn’t really a Trekkie/Trekker who attended conventions. But I was a huge fan of the original series, as well as a fan of Leonard Nimoy. Not just because he was the famous actor who played Mr. Spock, but mostly because he was my cousin!

Although my relationship with Leonard would grow greatly over the years, at that point we barely knew each other. I had only just met Leonard when I was sixteen on a family trip to California. I was hesitant to call his home in California just to ask for free tickets to a Star Trek Convention. Mainly for fear he’d have no memory of me! So I just thought I’d buy a ticket and try to see him to say hello somehow.

TwoNimoys at One Star Trek Convention

I took the subway into Manhattan, and got off at the Madison SquareGarden stop. The Penta Hotel was directly across the street. I made my way to buy tickets, when I saw awindow that said WILL CALL. I was studying acting at NYU, and I thought maybe a little acting could save me some cash.

I got to WILL CALL and said, quite confidently, “I‘m picking up my ticket left by my cousin Leonard Nimoy.” Now usually a lie like this would go nowhere, but then I flashed my driver’s license. There it was, in NY State issued black and white. My last name was officially NIMOY, and there was only one other person with that name in the building. Suddenly, I became a VIP guest. They gave me a ticket, and I was in! Once inside, I flashed that driver’s license around like a detective showing his badge. The Star Trek Convention workers practically put pillows down for my feet when I walked. As far as they were concerned, I was Star Trek royalty!

Backstage at the Star Trek Convention

After walking the Convention floor, it was time to go to the main auditorium, where Leonard was going to speak. I flashed my Nimoy Badge, and sure enough, that driver’s license got me backstage! I was in a holding area off to the side of the stage, that connected to the back of the hotel. After chatting with the Star Trek Convention workers for a bit, suddenly Leonard arrived with his handlers!

Leonard had an earpiece in, so it was very hard for him to hear me, but I managed to say hello. He wasn’t quite in the mood to catch up, since there were thousands of Star Trek fans screaming in the other room. Still, he was pleasant and courteous to me, considering he was about to go on stage!

Leonard took the stage to an audience greeting worthy of an icon! After his standing ovation, Leonard spoke at great length about Star Trek, with a lot of humor. I would come to know his sense of humor well, as well as the sound of his laughter.

Meanwhile, staff at the Star Trek Convention kept handing me presents for Leonard that the fans brought for Leonard. I guess they thought I could actually get them to his home. Then the staff started telling the fans to give me Leonard’s presents directly. My arms were overflowing with flowers, fan art, cards, letters, and more!

After the Star Trek Convention

When Leonard was done speaking, his handlers whisked him down the back corridors of the hotel. And I was swept away with them.Finally when we got to the freight elevator, Leonard turned to me, and asked about my family. “How’s Aunt Cele (my grandmother)?” I asked about his parents, and kids. He asked about my dad and uncle. No more Star Trek Convention pretense, just two family members saying hello. That was my favorite part of the whole day.

We exited ahotel service entrance, and Leonard was rushed into a waiting limo on Seventh Ave! I thought getting in the limo would be pushing my luck. So I handed over all the presents to a handler, and said my goodbyes. Leonard sped off, and there I was alone on Seventh Ave. No more famous cousin. Just another New Yorker, about to take the subway back to Brooklyn, like millions of other. But it was nice to be a VIP for an afternoon at least.