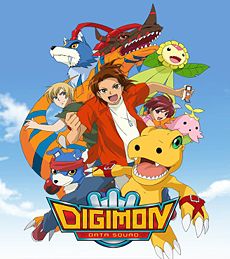 The Beginning of Digimon Data Squad

While voice-directing Naruto, an offer came in to dub the first new Digimon series in over 5 years. I didn’t realize how much I missed working on Digimon until we made Revenge of Diaborimon. That was truly a wonderful experience. Mostly because I was given creative freedom to make the dub I wanted, without corporate interference. So, when the opportunity came to work on Digimon again, I jumped on it!

The new series was called Digimon Savers, but soon Toei changed the name to Digimon Data Squad! Once again, I could dub it the way I wanted. The only thing Toei Animation wanted was final approval over certain things. They wanted to hear my main casting choices for approval and any new English character names. Also, they wanted to hear my top 3 choices for the lead actor. Everything was left up to me. I just couldn’t pass up that kind of opportunity. So, I handed the reigns of Naruto over to a long-time friend, Mary Elizabeth McGlynn, and I returned to Digimon!

After a rocky start fighting off Dub haters, I developed a pretty good relationship with the fans, especially with the people who ran the Digimon website With The Will. I would give them interviews and appear on their fan forums to answer questions from time to time. So, I decided to go straight to the fans there and asked their opinions about casting Digimon Data Squad. They came up with some great suggestions! I was planning on casting Richard Epcar as Captain Sampson, but a fan suggested Jamieson Price instead. I instantly agreed it was a great casting choice! So, Richard Epcar can blame that fan for all the work he lost.

Casting is seriously 90% of your success as a director. And that was one of the best casts I ever worked with! As soon as I saw Thomas in Digimon Savers, I knew Crispin Freeman was the man to play him! I knew I wanted to cast Steve Blum in something, and I asked him to read 3 roles for me. They were the best reads for all 3, so it was hard choosing which role to give him! Finally, I decided he’d play Falcomon. Collen O’Shaughnessey was a no-brainer to play Yoshi, as was Dorothy Fahn to play her Digimon, Lalamon.

I had Easter Eggs galore in Digimon Data Squad, and in casting as well. I decided to play the father of the lead character, and I cast Mary Elizabeth as the mom. A little nod to the fact that we were the daddy and mommy of Digimon voice directors. My top 3 choices for the lead actor were awesome, and any one of them would’ve been great. The late, great Michael Lindsay, the original Joe and Greymon. My best buddy Michael P. Greco. And long-time friend Quinton Flynn. I thought Quinton was the best choice. He looked like Marcus, and had a hot temper like Marcus. Lindsay was super talented, but I wouldn’t call him angry. Same with Greco. Also, I always felt Quinton and Crispin didn’t get along that well. That would play perfectly into their Digimon Data Squad characters. Toei actually said their favorite was Lindsay, but they told me, “Jeff-san, we will respect any actor you choose.”

When I was running the first two seasons of Digimon, we would only get one episode at a time. We had no idea where the overall story was going until we saw the next episode. But with Digimon Data Squad, I had the advantage of seeing the entire series already completed! I was able to weave in extra storylines, and character arcs without ruining the overall Japanese story! And I definitely took advantage of that!

My big problem with Savers was, there was no real explanation why Marcus had these magical powers. I thought of inventing one for the audience, but then I had a better idea. One I could slip right past Toei without them saying, “Uh, Jeff-san, you’ve lost it.” I decided to pay homage to Digimon’s past, and create the ultimate secret Easter Egg.

I decided that the whole season of Digimon Data Squad would be a computer simulation created by Izzy. There was trouble in the Digital World, and Izzy needed to create a new program to fix the bugs. And time after time, the program failed, so Izzy rebooted and started again. Finally, Marcus and Agumon show Izzy the program works, and they are sent to the Digital World to restore order.

Of course, the audience would have no idea this is what Digimon Data Squad was about. When I brought Mona in to play the King Drasil 2-9000WZ, she asked what voice I wanted. I told her it’s actually Izzy, and told her my secret back story. She said, “That’s what I love about you Jeff, you’re always thinking on another level.”

The Easter Egg worked on a couple of levels. First, it ties in Izzy with the original series. And it also plays into the Tamers theme, that the first two Digimon seasons were just a TV franchise. So, what you’re watching, isn’t necessarily the real thing. It could just be a TV show. Or in this case, a computer program.

Years later, the story of Digimon Tri seemed to slightly mimic my secret story. Coincidence? Conspiracy theorists, go at it!

One episode has gained notoriety amongst the dub haters. It’s the one where a giant bomb-type Digimon is walking around a theme park, threatening to blow it up. You can see why Disney would have an issue with that. So, they decided to scrap it from the English Dub series.

It wasn’t a big overall story arc episode, so it could have easily been tossed. But at the same time, it means one less episode of work for a lot of people involved. This didn’t sit well for the producer, and my long-time collaborator, Rita Majkut. So, she came up with the idea of coloring the bomb orange, changing his fuse to a stem, and calling him Tangerinemon! And instead of blowing things up, he’d just spray juice on everyone. I was game! Toei liked the idea, but decided they didn’t like the name. So Citramon was born!

Fans can balk if they want to. But the options were either get a Citramon episode or have no episode at all. I think it was a good idea, and we made the best of a bad situation!

There are so many great performances by the cast in Digimon Data Squad. I think it was some of the best work of Brianne Brozey, and Joe Ochman. And Skip Stellrecht, one of the greatest people who ever lived, was fabulous as Gaomon. I told him I wanted him to sound like Richard Widmark in an old western. Luckily, Skip was old enough to get the reference.

I also got to bring on actor friends who normally don’t do anime. Chris Edgerly, Brian Palermo, Brad Sherwood, and other friends made their anime debut on Digimon Data Squad. And I got to cast an old college friend from NYU, Adam Bitterman! I looked up to Adam as an amazing actor when we were in school! To direct him all those years later was a thrill I’ll always treasure. It was also the first time I worked with Kari Wahlgren, who I met at a Blood+ premiere party. Kari and I have been close friends ever since. In fact, she was my main emotional support almost the whole time I was making Fame-ish.

When we finished recording, I decided to go on an anime convention tour with Quinton to promote the show. I didn’t have the full Fox Kids promotional department anymore, and Jetix was only in a small number of households. I wanted as many people as possible to see Digimon Data Squad because I was super proud of it! Alas, there are still many people who never saw it, so if you can find it, please check it out.