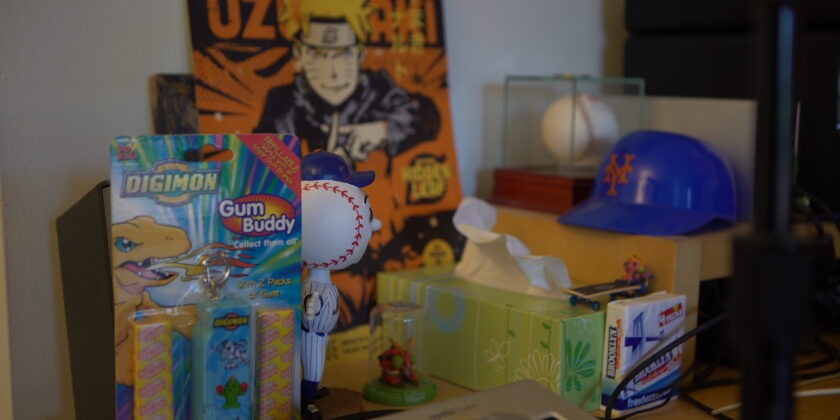 The First Days of Naruto

My First Brush with Naruto

In late May 2005, I was writing the English adaptations and voice-directing the anime series, Zatch Bell, at Studiopolis.

At the same time, Jamie Simone was finishing up directing a session in the same studio when I walked in early to start my newest project.

“I’m not sure I’m pronouncing it right.”

He then introduced me to Maili Flanigan, who was in the booth at the time. Jamie had started voice-directing the pilot just to get things started, and I was to take over immediately. It turned out that Maile and I already knew each other, as we’d met through mutual friends a year or so earlier. Maile’s the kind of person I always gravitate to at a party, so it was nice that we already liked each other— especially considering all the time we were about to spend together.

The first actual session I had with Maile was a long one, during which not much recording was done. Naruto, that little bastard, seemed to yell a lot in the early days. But when Maile yelled, it seemed to myself and the engineer that the mic was distorted. So, we switched out the mic, which took a few minutes. We recorded again, and again, distortion. This prompted mic switch-out number two.

After the third time, the engineer turned to me and said, “I think that’s coming from her voice.”

Maile has one of the most unique voices ever, a major reason why I think Naruto became so popular.

How to Pronounce it

Nothing drives me crazier than when someone mispronounces Naruto. Even after they’ve heard it on the show a million times, or SAID it a million times in scripts. Even if they WORKED on the show behind the scenes. That’s right, from the actors and editors to fans themselves, everyone keeps saying it wrong!

Okay, say it with me.

Rue, as in, “You’ll rue the day you ordered olive loaf for lunch.”

And toe, as in your big toe. They’re not all cute, folks.

Notice the NAH is emphasized. So, put it all together and you get NAH-rue-toe.  Say it again. Naruto.  Good. Actually, you’re supposed to just tap the T lightly like they do in Japan, but I’ll take this.

Now, I’ll tell you how NOT to pronounce it. It’s also a way to send shivers down my spine if you ever have that need. It’s not: “Nah-ROOT-toe.” I don’t even want to type that again.

The first time I heard the name was in 2005, and at the time of this post, it’s 2021. I’m hoping they keep mispronouncing it for a solid twenty years just so that I can write a long article about how it’s actually Nah-ROOT-toe just to screw with people.

Naruto Believes It, but I Don’t

We started recording before the official translation of Naruto’s English catchphrase could be decided upon. In Japanese, his catchphrase is “Dattebayo”, which has no literal English translation. So, Viz Media asked for suggestions. I think Studiopolis on the whole submitted 300 suggestions and not one of them was selected; believe it, and believe me.

Not only didn’t we pick it, I actually thought someone made a mistake. I thought someone at Shonen Jump in Japan mistranslated it to someone in America. In fact, they wanted Naruto to say it at the beginning of a sentence. As in “Believe it, I’m gonna pass that test!” I wrote an email saying I think we should at least put it at the end of a sentence where it made the most sense. They said ok, and “Believe it” was added to things like, “I’m gonna pass that test, believe it!!”

Another thing I couldn’t believe was that 60 Minutes did a segment on Comic-Con, days before Naruto first started airing. All I saw in the background was an abundance of cosplayers wearing Naruto’s headband. I texted Jamie, “I think we have a really BIG show on our hands.”

A lot of great voice actors appeared on Naruto. There are far too many to name, but many of my favorites like Yuri Lowenthal, Dave Wittenberg, Steve Blum, and Colleen O’Shaughnessey got involved. I jumped in the booth all the time to play one-line characters. So, the next time you see a group of teachers or villagers in the early episodes, listen for me.

We really had no problems while recording, but I have to be honest; Naruto was not my favorite show to work on. It was serious and had very few comedic moments. The notes and pick-ups were endless. Zatch Bell might not have been Gone With The Wind, but it was fun!

Also, I was a little ninja’d out. A year or so earlier, I was tapped to develop a semi-popular manga into a major motion picture. The name of the manga was Ninja High School. We pitched it for a good year to all the big studios, with some interest from Sony. Ultimately, they didn’t think the fan base was big enough for the manga yet. Now, fast forward to me voice-directing an anime series about… a ninja high school. Oh, the irony of show biz!

Once the first 25 episodes of Naruto were done, I produced a summary episode (26) made up of flashbacks and then, we started casting season two, as well as the first video game. When I saw the drawing of Rock Lee, for some reason, I thought Brian Donovan would be perfect for it. Plus, I missed working with him! We hadn’t done a series together since Digimon 02!

I called to ask him to play the role, and he turned me down. He had been concentrating on his on-camera career and didn’t really want to do anime anymore. I practically begged him to do it. He said he’d do it if I promised not to leave the show mid-season. I told him that I couldn’t imagine leaving, so he agreed to play Rock Lee.

What neither of us knew then though, was that before season two started, Disney hired Studiopolis to dub Digimon Savers. Jamie’s first inclination was to give it to Mary Elizabeth McGlynn to voice-direct and keep me on Naruto. But I suggested that Mary Elizabeth take Naruto, and hand over all of Digimon’s writing, directing, etc., to me. I thought Naruto was a better fit for her anyway, and of course, I had a long history with Digimon. My digi-resume included Digimon: The Movie, as well as the first two seasons of Digimon on Fox Kids. Coincidentally, I recommended Mary Elizabeth as my replacement on Digimon years earlier, so it was only fitting that I recommend her to replace me now, as well.

This left my broken promise to Brian. So, I begged him to forgive me for leaving, just like I begged him to play Rock Lee. Obviously, he forgave me, since he ended up playing a lead role in my live-action film, Fame-ish.

I think I’m a pretty good writer, producer, actor, and director, but I suck at finding steady work. Digimon Savers became Digimon Data Squad and lasted one year. I think Naruto ran for over ten.

Maybe my math is off, but I think I made a financial boo-boo. Mary Elizabeth once teased me that she thinks of me every time she puts another addition on her house.

I think we laid down a good foundation for the series in those early days. But it’s been so long ago now, that most people don’t realize I had anything to do with Naruto. Even though I was involved for such a short time, I’m proud of the work that the cast, crew, and I did back then.