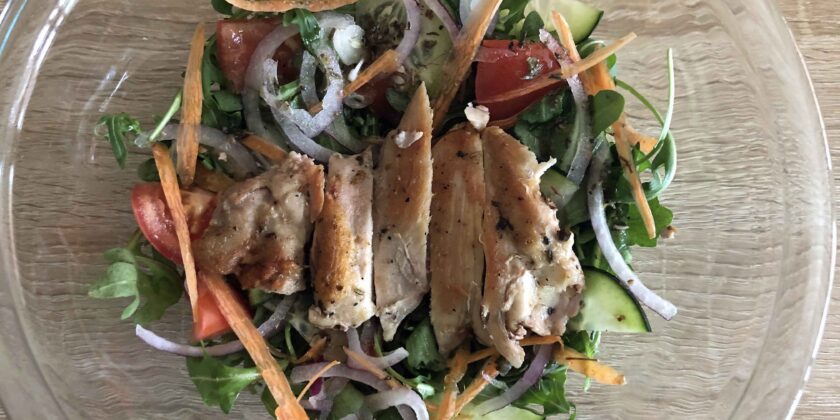 I’m not sure anyone reading this was a reader of my old paleo blog on Tumblr, “Cooking Caveman with Jeff Nimoy”. It’s still there if anyone wants to look. I originally got a following by calling readers fat bastards, lazy bastards, cheap bastards, etc. It’s funny, the more I called people bastards, the more readers I got. Stupid bastards.

I used to write a lot of paleo diet-related articles for my old blog and posted lots of recipes, too. A publisher even made a digital cookbook from my blog. I’m pretty sure I know everyone who bought a copy by their first name.

Way back in 2009, I was writing an animated film featuring these little tribal creatures. I wanted to give them food similar to human cavemen, so I Googled the simple question, “What did cavemen eat?” A whole world of The Caveman Diet came up, known much better today as The Paleo Diet.

I was fascinated by it. I’ll spare you the gory details, but this is it in a nutshell: it’s all organic and you can eat anything except for grains. No grains on the diet. That means no wheat. No wheat means no bread and pasta.

Aside from that, you’re all good!

Unless you want dairy because you can’t have that, either. Also, no legumes (no peanuts), no white potatoes, no sugar, no added salt, no soy, no processed food.

The only meat and eggs you’re allowed are the ones from animals eating only what they’re supposed to eat, like grass-fed cows. Salivating yet?

The good news is that there are a vast number of foods allowed on the paleo diet, as long as it’s all organic fruits and vegetables and clean meat and eggs. The problem is, you have to plan, cook, prep and clean up EVERY MEAL! It can be exhausting. But for Type-A’s like me, it was kinda fun and gave me a creative outlet. Plus, the health benefits were amazing!

So on January 1, 2010, I started the caveman diet. I thrived, losing a ton of weight without trying, and I became super healthy. The Cooking Caveman blog started in August of that year, and quickly had over 50,000 readers. For the next two years, I kept up the diet pretty good. I also pitched and developed a bunch of reality shows about The Paleo Diet. I even started a now-defunct Dating Site for foodies and people with food allergies. Then, in 2012, things started going south.

Suddenly, without changing my diet much, I started gaining weight. Doctors just kept telling me I was getting older and my metabolism was slowing down. So I figured, if I’m gonna gain weight eating healthy, I might as well eat pizza. So my cheat meals increased a lot more, and so did my waistline. Other things started to change in my body too. Yet, doctors kept telling me I had a bevy of different unknown viruses. I felt like a Rhesus monkey. And I was barely doing paleo anymore.

Don’t worry, the story has a happy ending. All of those ailments just turned out to be a brain tumor that almost killed me. Fortunately, they operated and I was able to lose weight again.

Clearly, that’s the main takeaway from having a brain tumor. I’m kidding, of course.

To read about my brain tumor and subsequent decision to make my film “Fame-ish”, click the links.

I did lose enough weight for my movie and then ate enough pizza to put the weight back on. And then, I’m not sure if you heard, there was a worldwide pandemic. The last thing I wanted to do was make my own paleo ketchup. I also figured- I live alone, so no one is going to see me naked again for 12-18 months. Let’s bookmark GrubHub and close down the kitchen for a while.

But enough is enough, folks. An out-of-control diet leads to an out of control body. My brain tumor left me with health issues, and I wasn’t doing myself any favors by eating cheeseburgers every day. So, a new year, new president, new vaccine on the way, and a new dedication to the paleo diet. But in a way that’s sustainable for my lazy, fat ass.

Since my brain surgery, I’ve simplified my life across the board. And now my diet is no different. Has this happened to you since lockdown? You think you should take advantage of this downtime to learn something or make something new. But the reality was you felt too paralyzed to do anything? No? Just me? Oh well, that’s how I felt. I could barely cook. Now that I’m more inspired to get back on the paleo bandwagon, I still have no energy to cook.

So, I developed a little plan that works for me. If it works for you, great. If not, I’m not selling anything. Get out of my kitchen. Basically, I cook a bunch of protein on one or two nights during the week. Then, I pair the protein with raw, organic veggies every meal. Sometimes, I cook a little by throwing ingredients I already have in my kitchen into a skillet, but there are no recipes to follow and no meals to plan. It’s all very simple.

Just pairing what’s in my fridge and pantry at any given time. A bunch of raw, or slightly cooked veggies, with a little clean meat, or clean eggs. My health has been improving daily, and the weight is coming off too. And it’s been easy to stay on the diet. Here’s a preview of some paleo meals I’ll tell you about in soon-to-come blogs: