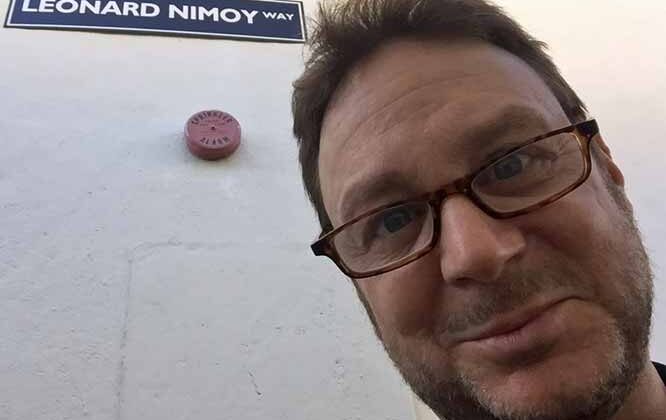 Jeff Nimoy on Being Directed by Leonard Nimoy (Part I)

I once wrote an article after my cousin, Leonard Nimoy, passed away detailing our relationship. But now, I want to delve a bit deeper into some of the stories— mainly the ones where I was directed by Leonard Nimoy.

It was fall of 1988, and I had just moved to Los Angeles from Brooklyn, NY. I had recently graduated from NYU’s Tisch School of the Arts for acting, and was eager to get my career going.

There was a little gathering over at Leonard’s house and my west coast family was all there. Leonard and I were talking when my Aunt came over and said, “Leonard, look at my handsome nephew! When are you gonna put him in the movies?!” I’m glad she asked so I didn’t have to. Leonard said, “I don’t have a movie right now. But let’s start with getting him into the Union.”

You can’t do much as an actor in Hollywood without being a member of the Screen Actors Guild (SAG). And to get in, you have to get hired by someone! Leonard promised that the next thing he directed, he’d get me my SAG card.

The following July, cameras rolled for a motion simulator ride, Epcot Center’s Body Wars, directed by Leonard Nimoy. The idea behind Body Wars was to take park visitors on a mission, helmed by a miniaturized crew, as they were injected into a human body. I played a miniaturized technician. Though I only had a few lines, I was on-camera quite a bit.

When it was time to film my close-up and my first lines ever on-camera, I was super nervous. First of all, the cameras they use in some movies, especially in 1989, were ENORMOUS! And that huge camera is right smack in your face. Plus, in a close-up, the lights and crew are all focused on YOU! There’s no place to hide.

On top of all that, my first line was a mouthful.

“Med One, please report to the de-miniaturization chamber for decontamination.”

Leonard shouted, “ACTION,” and I butchered the line pretty colossally. After I followed with 3 or 4 massive flubs in a row, Leonard stopped shouting ACTION. In fact, I stopped being directed by Leonard Nimoy altogether. Suddenly, Cousin Leonard showed up. This time he gently said, “Ok, Jeff, no pressure, just say it when you’re ready.”

I managed to finish my lines without causing the production to declare bankruptcy. They weren’t budgeted for a 22-year-old kid who couldn’t say 3 lines in under an hour.

Afterwards, Leonard beamed a smile down at me and asked me how it felt.

I said, “Did you have to give such a hard first line?” He said, “What did you want to say, ‘Hi mommy?’ Or something easier than that?” And then he let out that big, wonderful, boom of a laugh he had.

Directed By Leonard Nimoy, Once Again

Later that year, I saw Leonard at his brother’s house for a Hanukkah party.

He said, “I heard you’re gonna get a day’s work in a movie directed by Leonard Nimoy.” That was news to me! Fantastic news! I thanked him profusely and was pretty psyched! A few days later, the casting director called and said she was sending over a script. The movie was called (at the time) New York Times, starring Gene Wilder. I was going to be playing THE WAITER.

I worshipped Gene Wilder! When the script arrived, I tore it open, and right away was the scene with THE WAITER. My first scene introduced Gene Wilder’s character, so I knew it wasn’t going to get cut! And to top it off, I had a second scene that was one-on-one with Gene Wilder himself! To be directed by Leonard Nimoy is one thrill, but to act with Gene Wilder was a dream!

I told every single person I ever met, and a few I hadn’t. My Hollywood dreams were all coming true thanks to Leonard! Tears of joy filled my eyes as I called friends and family back in Brooklyn.

I had a total of 6 pages to shoot, and I’d never worked so hard on a part before or since. My lines were memorized back and forth and I knew my character inside and out. I even learned some relaxation exercises so I wouldn’t repeat the great close-up disaster I caused on Body Wars.

Little did I know it would be a much bigger disaster than that.